As part of our “Isle of Women in Maritime” series, we continue to celebrate our Island’s female maritime professionals through various features on many of the fabulous women that continue to help shape, lead and make an impact in the Isle of Man’s maritime sector.

This month’s interview is with Cathy Lane, Director of European Operations at MHG Insurance who is also an Executive Committee Member of Isle of Man Maritime. 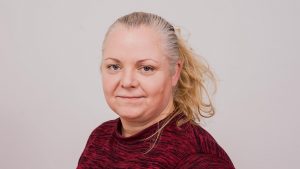 So Cathy, take us back to the start of your career; how did you get started and how has your career evolved within the maritime insurance space?

I’ve been very lucky to have had quite a diverse career. I originally trained in the arts, both here and in London. I initially came back to the Island to pay off my student debt, taking a role at Ronaldsway Shoe Company, before moving back to London again where I continued to work in the footwear industry as a Ladies Range Footwear Designer for a supplier to Marks and Spencer and then, a Production Manager for a Children’s Footwear Company.

However, once again the lure of the Isle of Man was all too much and I returned to the Island and decided to re-train within the Financial Services sector.

I took an administration position at Financial Options, where I trained as an Independent Financial Adviser, and stayed there for over 8 years.

After this, I worked at Kestrel Insurance for a short while, before accepting the challenge of setting up the office and team at MHG Insurance in January 2011 and where I have happily worked ever since. My official title is ‘Director, European Operations’.

Have you found being a woman in such traditionally male dominated industries (i.e. Insurance & Maritime) a challenge? Can you give us some examples of how you have managed to climb the career ladder while circumnavigating those challenges?

To be honest it has never bothered me. I have worked on factory floors in the past and as you can imagine that can be quite the learning curve for a young woman. But, being a woman, and also quite small in stature, I have just got on with it – I think I have always been more than able to hold my own in male company.

Part of that mindset is not to rise to any provocations; it is important to keep your own but also to focus on what’s important to you and, of course, the business you work for.

On a lighter note, what do you like most about your current role? Is it the travel, the people management, the technical aspects or something else?

The variety of my role at MHG is without doubt my favourite part of the job. I wear many hats during the working day. I would hate to be bored in my job, which trust me, is not going to happen any time soon in my current role!

However I must say, although I personally am not a big fan of travelling, I have the utmost respect and admiration for those business travellers who catch early and late flights and spend so much of their time away from home.

Tell us a little more about MHG Insurance, in particular the Isle of Man office and its team?

MHG was originally formed in Miami in 1991 (before moving to Fort Lauderdale) as the founders wanted to offer sea going crew the same options as their land-based colleagues.

Disney Cruise line was the first big client, and I’m very proud to say remains a valuable client to this day. My colleague Andrew Dudzinski (our MD and Group CEO) is British and was keen to have a presence in this part of the globe – the Isle of Man was the standout jurisdiction to set up the office we have here today.

We are currently a team of 10 and have further plans to grow, which can be a challenge on the island as our area of insurance is such a niche skill set. We are fortunate to have such a fantastic team here now – we are more like a family than work colleagues, so any new additions will have to be carefully selected.

Without giving too much away, what are your plans for the next 5 years? Do you have plans to evolve beyond a purely maritime focused business?

We are entirely maritime focused and plan to remain as such, however we are always looking at product development.

For example, we were the only company that offered liability cover specifically for cruise ship entertainers and concessionaires and recently also launched a charters liability product for the yacht charter market. We also continually review our core insurance products to make sure they reflect the changing needs of the maritime sector and our existing clients.

Rising through the ranks of any sector or organisation is always hard work. If you could offer one piece of advice for someone looking to follow in your footsteps, what would that be?

That’s an easy one so I’ll give you three!

2. Never be afraid to say if you don’t understand something, and

3. Never be afraid to admit if you’ve made a mistake.

And finally, as a leading figure working in the maritime industry how do you see the islands maritime sector changing over the coming years?

Well, that is what is exciting about my position on the Isle of Man Maritime Executive Committee. Areas such as the Island’s harbour strategy and cruise ship focus are really interesting opportunities – I want to learn more about how this is forming and where the Island can really make its mark. These are not just opportunities for MHG but for the Island as a whole; a successful economy benefits everyone. I can’t wait to get involved!