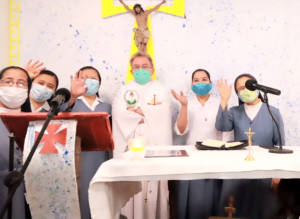 The Isle of Man Ship Registry has become the first flag state to broadcast a mass direct to crew aboard its ships.

Isle of Man Ship Registry’s Director, Cameron Mitchell, said the masses are being made possible through its new seafarer welfare app ‘Crew Matters’, which has been developed in partnership with Liverpool-based training company Tapiit Live.

The app enabled the mass to be beamed live from a church in Manila in the Philippines with technical support from Tapiit’s UK team. The mass was held by Father Paulo Prigol, the chaplain of Stella Maris-Manila, who is part of the Scalabrinian Missionaries which is responsible for seafarer welfare.

Mr Mitchell said the mass was a success and the registry planned to stage a mass each weekend which will be available to all catholic crew among the 10,000 seafarers and 400 ships sailing under its flag.

Mr Mitchell said the ultimate aim will be to offer religious services to seafarers of all faiths and denominations where there is a demand.

“Faith is a very important part of life for many seafarers and it has taken on additional significance under the current conditions.

“Seafarers have been under increased pressure during the pandemic and have additional concerns for their families from whom they have been separated for many months, sometimes years. Not being able to practice their faith ashore due to Covid restrictions has removed an invaluable facet to their coping and wellbeing strategies, so having access to Mass through the Isle of Man App is a superb innovation. We are delighted to be a part of this ground-breaking venture.”

Mr Mitchell said the app is designed to encourage seafarers to spend less time alone in their cabin.  He said functions include providing social activities such as live gym workouts to Tapiit’s award-winning training classes.

“The app provides structured welfare support for the seafarer, ranging from a health and wellbeing self-help library that includes nutritional advice, through to Tapiit Live’s interactive support sessions.”

“Users will have access to a full month’s agenda of physical and mental wellbeing classes and educational trainings, including fitness and yoga sessions. Seafarers can also log their work and rest hours, and if they feel stressed or unwell there is a live SOS function which provides immediate access to the Seafarers Help Live Chat, which is free, confidential and available 24-hours-a-day, seven-days-a-week. In addition, the app connects to Stella Maris and enables seafarers to find contact details for its chaplains in 54 countries.”

On a practical level, Cameron said the app also tackles the problem of storing seafarer documentation in one place, as well as providing a link to trade union Nautilus with details of membership, news, careers, and jobs and training opportunities.  He said the app contains a wealth of information from the ship registry including the master’s handbook, shipping notices, IOMSR news feeds, marine traffic and local port services.